Posted on February 15, 2018 by Climbing Downhill

It’s a mystery, this old book.

My aunt found it while going through items in her home.  It’s the same house her parents lived in for many years. They were loved by many family members through the years and they were responsible people.  As such, their home became a depository for the belongings of loved ones who had passed and left them in charge of their affairs and belongings.  There were piles and boxes of miscellaneous things that had likely been mixed together as they were shuffled by hands over many years.  The book has no date, but it is certainly old and shows it’s age.  She sent it to me.

The back of the book shows a name.

I was excited to see a clue.  However, the name is nowhere in our family tree., so it is still a mystery who Alma was or what her connection might have been to someone in the family.  All these years later, Alma’s book landed in my hands.

I opened the cover.  The inside page looks like this:

Turning the pages almost felt like trespassing through someone’s private journal.  As it reads on the first page, the book began as an English class notebook. Inside is an interesting combination of poems, song lyrics, notes, scenes from Shakespeare, etc.  One section is hand written directions for games to be played in groups.

It also appears to have been reused later as s music book as Alma, or someone else, taped sheet music on top of the English notes.

In the back of the book are words of patriotism. I did an internet search for the words and discovered they are well-known and authors were easy to identify. It’s wonderful that Alma took the time to hand write the words. I have coupled the handwriting with the printed, easier to read, text, and I am including them here.

I believe that, with all the controversy about our national anthem and our flag, these words show a history of what our nation’s flag meant to its citizens years ago; and what it should still mean to us today. 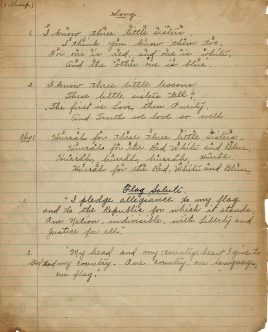 I know three little sisters,
I think you know them too,
For one is red, and one is white,
And the other one is blue.

I know three little lessons
These little sisters tell;
The first is Love, then Purity,
And Truth we love so well.

God Save the Flag 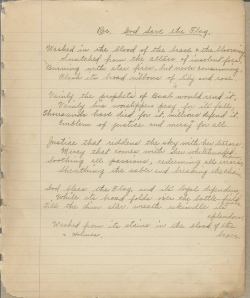 Washed in the blood of the brave and the blooming,
Snatched from the altars of insolent foes,
Burning with star fires, but never consuming,
Flash its broad ribbons of lily and rose.

Vainly the prophets of Baal would rend it,
Vainly its worshippers pray for its fall,
Thousands have died for it, millions defend it,
Emblem of justice and mercy for all.

Justice that reddens the sky with her terrors,
Mercy that comes with whitehanded train,
Soothing all passions, redeeming all errors,
Sheathing the saber and breaking the chain.

God bless the Flag and its loyal defenders,
While its broad folds o’er the battlefield wave,
’Till the dim star wreath rekindle its splendor.
Washed from its stains in the blood of the brave.

There are many flags in many lands,
There are flags of every hue;
But there is no flag, however grand,
Like our own “Red, White and Blue”.

I know where the prettiest colors are,
And I’m sure if I only knew
How to get them here, I would make a flag
Of glorious Red, White and Blue.

I would cut a piece from an evening sky,
Where the stars were shining through,
And use it just as it was on high,
For my stars and my field of blue.

Then I’d want a piece of a fleecy cloud.
And some red from a rainbow bright,
And I’d put them together, side by side,
For my stripes of Red and White.

We shall always love the stars and stripes,
And we mean to be ever true
To this land of ours, and the dear old flag,
The Red, the White and Blue.

Then Hurrah for the flag,
Our country’s flag,
It’s stripes and white stars too.
There is no flag, in any land,
Like our own Red, White and Blue.

The book still remains a mystery in some ways; but all these years later, tattered and worn, Alma’s writing has been read and appreciated.   Hats off to you, Alma, whoever you are.

Wife and mother of grown kids, in my 60's and dealing with MS, making life's moments count and trying to offer something of value to others along the way. https://climbingdownhill.wordpress.com
View all posts by Climbing Downhill →
This entry was posted in People Stories and tagged blue, book, country, flag, journal, old, patriotic, red, school, stars, stripes, white. Bookmark the permalink.