Bumps in the Road

Posted on August 1, 2017 by Climbing Downhill

Normal bodies are powered/fueled by food, water and sleep.  The output of human strength can reflect the amount and quality of input it is given. Needed strength  varies from day to day, and balance is found when input equals output.

When a body doesn’t work normally and movement on its own is limited, the owner turns to wheels.  Some can use wheeled walkers and/or manual wheelchairs, still powered by a user and his/her food, water and sleep.  Some need electric scooters or wheelchairs which don’t require a lot of power by the user; the power for those comes from electricity through a battery.  Electricity replaces human strength.  Seems simple enough, right?

The premise is simple, but the execution can be complicated.  Batteries can only put out the energy that is put into them.  Just as human strength is limited and must be recharged by regular food, water and sleep, so must a battery be checked and recharged with electricity routinely or it won’t function properly.  A person using an electric wheelchair must fuel his/her body and the wheelchair; but unlike internal signals like hunger, thirst and fatigue; a battery’s strength level is evident only by an external indicator, usually a dial or series of bars on the vehicle.  A user must constantly monitor the battery power level to know when recharging is necessary.

Just as physical energy can sometimes be depleted without actively noticing warning signs, the level of battery strength can be overlooked and low or no power can come as a surprise.  With many other things to remember, sometimes checking battery strength is  forgotten, and movement can stop abruptly.   There have been times when I have managed to maneuver my chair near the charger just as the last red warning bar fades and  disappears, and I breathe a sigh of relief that I reached my destination.  There have also been times when my battery has completely died in the middle of a hallway.   Electric wheelchairs have a release button which allows manual movement, but they are heavy machines and moving and steering them manually can be challenging.  The times when my chair battery power is completely drained are pauses in my path, bumps in the road.

When a power source ends, waiting begins.  Hopefully, when it happens, the user isn’t on the way to the bathroom or caught with nothing to do; and hopefully, someone is available nearby to help.  If not, the user is trapped and a longer waiting time is required until someone can help.

One day, when I suddenly realized my chair battery was almost dead, I managed to get its heavy charger and roll into place near an open electric outlet just before the power was depleted.  I plugged one end of the charger into the chair, then the other end into the wall outlet.  I took a deep breath and started the wait for the battery to recharge.  At the time, my frustration was high and my spirit was low.  I lamented to myself that I would be there for some time with not much more than my thoughts and a partial view out a lace-covered window.

I looked around me and realized my wheelchair was sitting where our piano once was.   It had been sold after the kids were grown and left home, and MS had taken too much of my hands to play.  What had once been an instrument had sadly become just a decoration.  I had put most of the music in a box and stored it, but I kept an old hymnal out and placed it on a table.  There it sat, not too far from me.   And…..if…..I….could….reach my arm out just…..past…..my….. comfort zone….YES!  I got it! 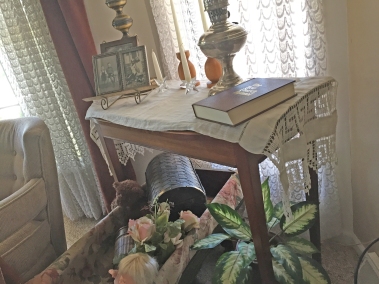 Damaged by MS, my voice isn’t much to listen to; but, thankfully, God hears the heart.  I searched that old book for familiar titles and started humming a melody.  Words followed and peace began to replace frustration, until I was genuinely enjoying the break in my day.

Time flew by.  Soon Mr. Legs was home from work and my chair’s battery was charged enough until a full nighttime charge could take place.

What had seemed like a bump in the road of my day, ended up  being a rest area.

Wife and mother of grown kids, in my 60's and dealing with MS, making life's moments count and trying to offer something of value to others along the way. https://climbingdownhill.wordpress.com
View all posts by Climbing Downhill →
This entry was posted in Mobility Equipment, MS/Multiple Sclerosis, People Stories and tagged battery, charge, charger, electric, hymn, hymnal, praise, sing, song, user, wheelchair. Bookmark the permalink.

4 Responses to Bumps in the Road