Posted on December 22, 2014 by Climbing Downhill

NOTE:  If you haven’t read Aging Together-Part 1, please do so before continuing to read this post, which is Part 2 and the rest of the story.

He is the first dog we have had.  Thirteen years is a long time.

After switching to canned dog food, Chester gained enough weight to fill out a bit, but his body structure seemed to be changing.  His eyes had looked different, but now all of him seemed misshapen.  He looked crippled like me and moving became a struggle.  I was amazed he still managed to go down and back up the deck stairs to the back yard to do his business.  He had caught up to me in age.

He loved to be petted, but from early on he didn’t like to be held or carried. With both arms under his dog belly, Mr. Legs picked him up to take him out and bring him back in numerous times and Chester allowed this to happen. As time went on though, the pain increased and he could not tolerate being picked up or moved in any way.  He still relished being petted and we spent more and more time giving him that one last pleasure. When our hands moved over him, we could feel that something was happening to his skeletal system, and even his hair felt different.  Thirteen years of petting him didn’t seem long enough.  We could see and feel that his body was failing him….much like mine.

Then, even the canned food could entice him no longer.  He drank some water, but not a lot.  Getting to the water bowl was a feat in itself because his legs didn’t have the strength to hold him up on the kitchen tile.  We changed his environment as much as we could to make him comfortable.

He would bark until we consented and let him go outside.  While he had usually been quick to come in especially when it was cold, he started to spend hours in the back yard and did not want to return.  He would find a comfortable place, then get settled as if to say he was ready to go.  More than once, Mr. Legs prodded him insisting he get back up the stairs and into the comfort of the house and his bed.  He had not only lost his will to live, but was trying hard to die.  And we were trying hard to keep him alive.  Thirteen years didn’t seem very long.  One night at midnight, after waiting 2 1/2 hours for him to come back, Mr. Legs decided to allow him to have what he wanted and remain there in the sub-freezing temperature.  It didn’t seem like there was much choice since he was biting with any attempt to move him.  But we had tried so hard…  Upon my urging, one last attempt was made, this time with a leash. He was finally inside and at least more comfortable than ending his days subjected to cold temperatures.  Thirteen years was long enough for him, but he’s the only dog we ever had.

He is more fur here than anything else. 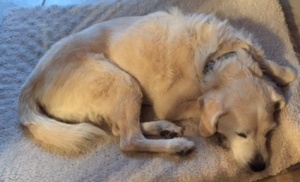 With a leash pulled up to steady him some, he could do a few stairs to get out to the front yard.  Mostly, he lay on his bed and watched what he used to be part of.  Because I have MS, I understood.

Then, what we had all been waiting for happened.  His favorite boy came home from college.   Chester didn’t hear the car door or even the front door.  He couldn’t run up to him to greet him.  But his tail pounded on the floor with excitement when he saw him.  And the boy knew what to do.  He couldn’t play rough with him or wrestle, he couldn’t take him for a walk, but he comforted him by petting him and he spent all night on the floor next to him.

It was cold out and snow covered the ground the next morning.  The weather fit the mood.

The appointment was at 8:00.  The vet did what he’s probably done thousands of times, but this was the first time for us.  He was the first dog we had.  Chester went gently and peacefully and comfortably to doggie heaven.  Thirteen years was a long time for a dog.  We were no longer aging together.  He reached the finish line before I did, even though I can move less than he could.

So goodbye Chester.  You crazy high-strung dog who dug in the trash and jumped on visitors.  Goodbye tufts of dog hair on the floor and sprinkles of hair covering dark pants.  Goodbye to stinky air after he found dropped cheese on the floor.  Goodbye to barking. Goodbye to frustrating times of trying to coax him inside when I was home alone and couldn’t physically direct or force him inside.  Goodbye to grooming charges, veterinary bills and expensive boarding fees. Goodbye to the dog who served his purpose and loved us well.  Goodbye to our pet who we often felt annoyed by, but loved.

This is no time in life for us to have another dog.  We have no boys at home to overcome fears or help with daily chores.  Mr. Legs has all he can do to take care of me.  Chester will be the only dog we ever had.

Wife and mother of grown kids, in my 60's and dealing with MS, making life's moments count and trying to offer something of value to others along the way. https://climbingdownhill.wordpress.com
View all posts by Climbing Downhill →
This entry was posted in Pet Stories, This and That and tagged dog, doggie, end of life, family, heaven, pet, sleep. Bookmark the permalink.

12 Responses to Aging Together – Part 2