I’m not sure it’s possible to describe my Great Uncle Al with mere words and pictures, but  I’d like to try.  He was and is worth knowing. 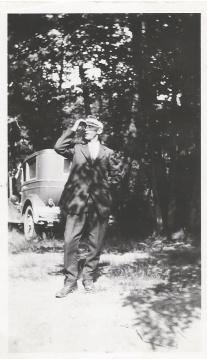 He’s one of the two brothers in a large family who never married and, along with a sister, stayed on the farm in northern Wisconsin.  I asked him once if he ever thought about marrying.  He said he had a girl for awhile, but she married one of his brothers instead.  Ouch.

Al was a worker.  He loved to garden.  He was always growing or making something to sell. 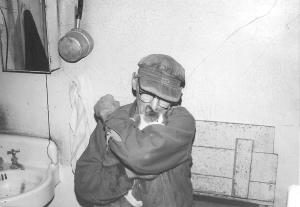 Al had a lot of cats in his lifetime, but he always named his favorites Shee and Hee, so it seemed like those two cats lived forever.

And he would draw out their names and repeat them when he spoke quietly in their ears.   “Sheeee,  Sheeee.” 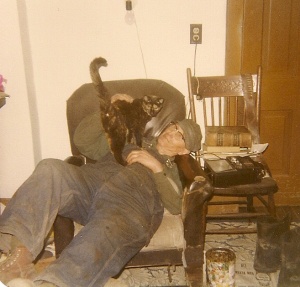 See the cardboard fireplace in the above picture?  That was put up one year at Christmastime and NEVER taken down.  See the can on the floor in the next picture?  He chewed tobacco and that was his spitoon.  I wouldn’t recommend these as decorating tips.  Cleanliness wasn’t a top priority at the farm, but that just made it a more interesting place.

I remember he had a horse named Queenie and he told us she talked to him.  We’d go down to the barn and he would whisper to the horse and the horse’s mouth would move.  He made a believer out of me.  He gave all of their cows names.  He talked about Bluenose the most.  He talked about his neighbors never letting their cows out to pasture because it was too much work for them to get them back to the barn.   He was sad for those cows.

He wrote entertaining letters telling about Shee and tomcats and the weather and what was or wasn’t growing in the garden, and he once sent two-toned cat whiskers as a prop for a story in his letter.  He didn’t have a television.  He didn’t want one.  He listened to the radio.  A lot.  He liked oatmeal.  And peanut butter.  But there weren’t many foods he liked more than Dairy Queen hamburgers and ice cream.  He talked about sinus trouble, bad eyesight and national politics.   He had strong political opinions.  He remembered dates in an impressive way, talking about the snowstorm of 19-something (I didn’t say I remember).  He could draw out a story to last an hour, starting with “wwweeelllllll….”  He assigned nicknames to a lot of people.  At his funeral, neighbors talked about all the nicknames he used.  Ones I remember him using are “13” and “The Widow”.  He called my grandma “Dode” instead of Dora.  He called my dad “Jimmy Boy” until my dad died at age 61.  Both my sister and I were “Jimmy’s Girl”.  He related to the main character in his favorite comic strip and habitually signed his letters with that character’s initials.

He always wore overalls, and usually a denim hat.   His clothes were stained and somewhat tattered, but his face was always shaven and it lit up when he laughed.  He lived many years longer than his brother and sister.

When I was in college, I got a ride to the farm one spring weekend from a friend’s boyfriend because it was between college and his hometown.  I helped with the making of maple syrup and I cleaned alongside my grandma who was visiting there too.  I gained his respect when the trailer got stuck in the mud and I lifted the back of it up and over onto firmer ground.   He liked having another interested listener to his stories.  Although my husband and I moved around a lot, we went to visit him when our oldest child was a baby.  We took him to Dairy Queen.  Once I drove the four hours alone with my 18-month old son to visit him.   Another trip to Dairy Queen made him smile.  I went to see him after he moved into a nursing home.  The staff said he hadn’t been eating much.  I brought him Dairy Queen food and he ate it all.  At a strategic time, he whispered to me that there was a political conspiracy within the home there.  I suppose most people would think that his sense of reality was fading.  I think in some way there had to be truth to his statement and he was describing it in the way he knew how.  His watch had gone missing and I offered to send him one in the mail.  When I got home, I bought a watch, pajamas, a hat and some candy and sent them to him in a package.  I called awhile later and talked to him – he had never received the package.  Conspiracy proven.

Al was a character.  He wasn’t eccentric, but he was full of personality.  I hate that he lived so many lonely years without family nearby.  Some family members did try to get him to move south with or near my grandma, but he always responded with “I’d be like a fish out of water”.  He added flavor to my life and I am glad not only that I knew him, but that I can claim him as family.  He worked his way into my heart and he’s still there.  He was, indeed, great. 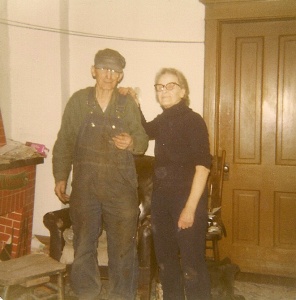 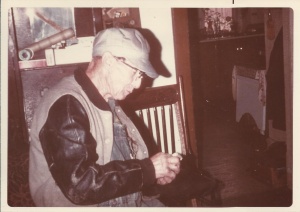 Everyone should have an interesting uncle or aunt to tell stories about.  Who is yours?  Have you shared stories about him or her with younger family?  Is the past recorded for generations that will follow?  Better yet, are you the aunt or uncle that makes your family interesting?  Could you be?

Wife and mother of grown kids, in my 60's and dealing with MS, making life's moments count and trying to offer something of value to others along the way. https://climbingdownhill.wordpress.com
View all posts by Climbing Downhill →
This entry was posted in Family History, People Stories and tagged family, history, memories, uncle. Bookmark the permalink.

2 Responses to The Great Uncle Al